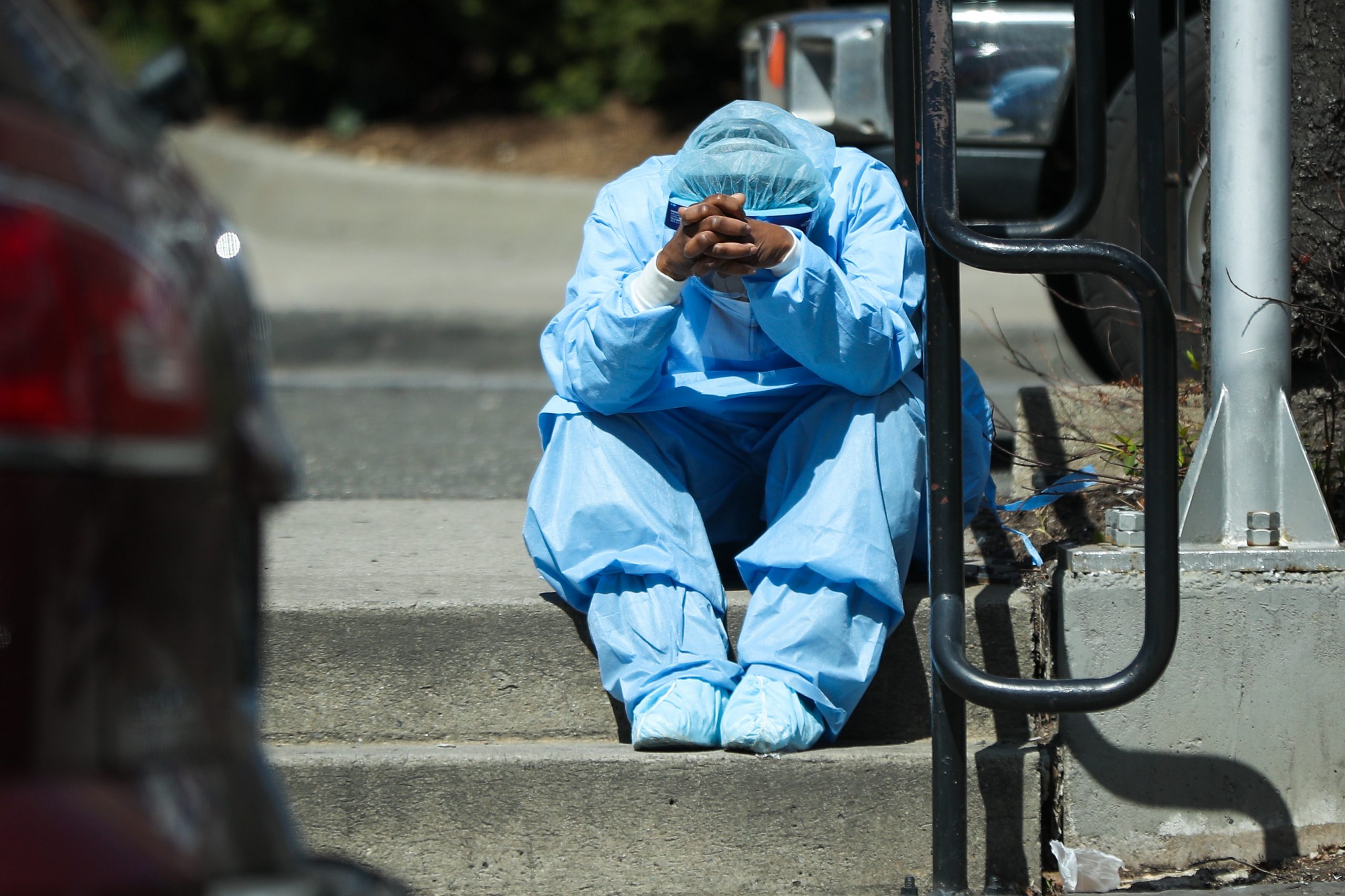 NEW YORK, USA - APRIL 1: A sad and tired healthcare worker is seen by the Brooklyn Hospital Center in New York, United States on April 1, 2020. New York is the U.S. state worst-hit by the pandemic. As New York state grapples with the novel coronavirus outbreak, 1,941 people have died and 83,712 have tested positive for the virus, Governor Andrew Cuomo said Wednesday. (Photo by Tayfun Coskun/Anadolu Agency via Getty Images)

Sub-Saharan Africa could be plunged into its first recession in 25 years as the global health crisis brought on by the novel coronavirus wreaks havoc in the region.

Many countries, like Nigeria, Angola and South Africa, are dependent on commodities for a large chunk of their trade and revenue. All have been put under immense pressure as their economies have grounded to a halt.

The World Bank estimated that growth could tumble to -5.1 percent from 2.4 percent, triggering food insecurity.

The pandemic could cost the region as much as $79bn in lost output, from falling commodity prices to a drop in tourism.

The Nigerian government is seeking $7bn in emergency funding from the International Monetary Fund (IMF) and the World Bank. Kenya is in talks to tap the World Bank and the IMF for $1.2bn. Kenya’s economy had already been under strain, but the coronavirus could further stretch the country’s finances. And there are fears that healthcare could be completely overwhelmed.

Dr Cathy Mwangi, chief executive officer at mHealth Kenya, shared her thoughts with Al Jazeera on the effect the coronavirus pandemic could have on Africa’s healthcare systems. Can Gulf oil producers cope with $20 a barrel?

Despite a landmark cut in production, the world is still oversupplied with oil and prices could head below $20 a barrel. That would decimate the finances of many OPEC members and put 80 percent of United States shale producers out of business.

Even if oil prices fall to $10 a barrel, the oil-rich monarchies of the Gulf are still able to eke out gains, as other nations make losses.

Prior to this crisis, the IMF warned that Arab monarchies risked squandering their $2 trillion in wealth within the next 15 years.

Akber Khan, senior director of asset management at Al Rayan Investment, explains how a drop in oil prices could affect Gulf oil producers.  Why is Germany opposed to ‘coronabonds’?

The European Union agreed to a 500 billion-euro ($544bn)  package for countries hit hard by the pandemic, but they stopped short of pooling borrowing, as demanded by France and Italy.

Many observers believe this massive rescue package is not enough to kick start economies, after the crisis.

Germany, the key power-broker, has been opposed to the sharing of debt, or so-called coronabonds.