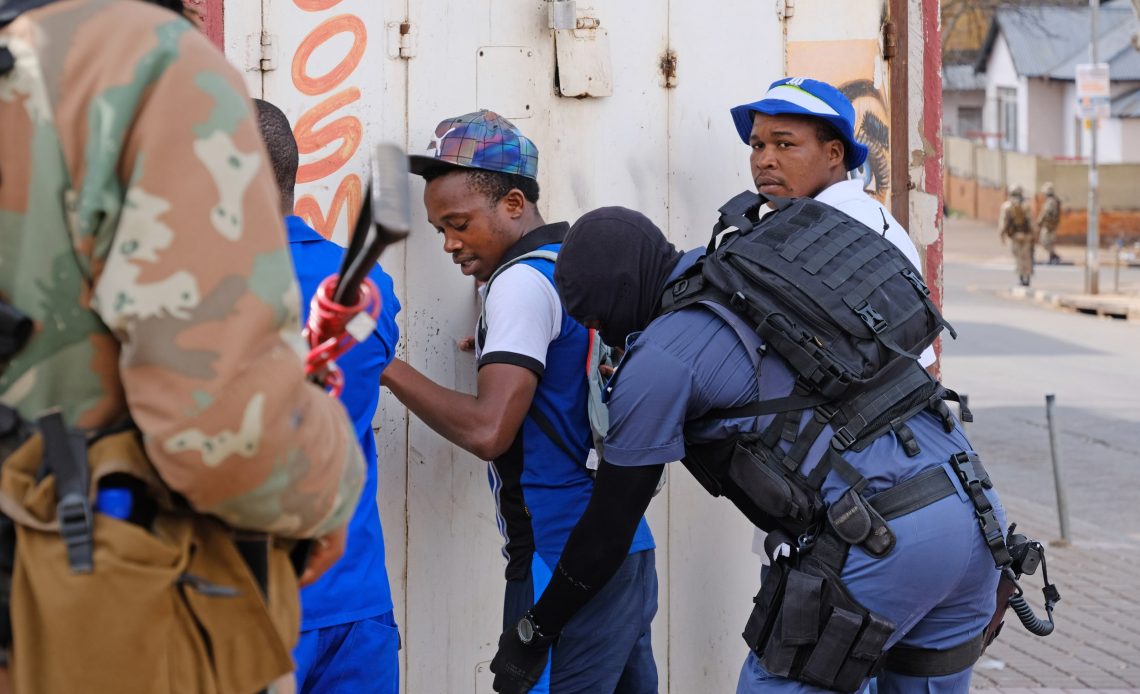 JOHANNESBURG, SOUTH AFRICA - APRIL 18: Men are searched by a SAPS officer during a South African Police Service (SAPS) Metro Police and Army supported patrol in Rockey Street, Yeoville. Random searchs and social distancing measures on April 18, 2020 in Johannesburg South Africa. Under pressure from a global pandemic. President Ramaphosa declared a 21 day national lockdown extended by another two weeks, mobilising goverment structures accross the nation to combat the rapidly spreading COVID-19 virus - the lockdown requires businesses to close and the public to stay at home during this period, unless part of approved essential services. (Photo by Dino Lloyd)

“We’ve received reports of disproportionate use of force by security officers, particularly in poor and informal settlements,” she said.

“Rubber bullets, tear gas, water guns and whips have been used to enforce social distancing in shopping lines…and outside their homes.”

According to the UN, more than 17 000 people have been arrested in South Africa for breaking lockdown regulations.

This, she added, created a “toxic lockdown culture”.

The message came after UN High Commissioner for Human Rights Michelle Bachelet emphasised that emergency powers “should not be a weapon governments can wield to quash dissent, control the population, and even perpetuate their time in power”.

“Shooting, detaining, or abusing someone for breaking a curfew because they are desperately searching for food is clearly an unacceptable and unlawful response.

“So is making it difficult or dangerous for a woman to get to hospital to give birth. In some cases, people are dying because of the inappropriate application of measures that have been supposedly put in place to save them,” she said.

Just a week into South Africa’s nationwide lockdown, IPID reported that it was investigating three deaths, allegedly at the hands of police.

The family of Collins Khosa from Alexandra, who was allegedly beaten to death by law enforcement during the lockdown, will approach the High Court in a bid to force government to intervene in the alleged heavy-handedness.

This followed the dismissal of their application for direct access to the Constitutional Court last week.

“This case is about civilians being murdered, tortured and subjected to other cruel, inhumane and degrading treatment during the nationwide lockdown,” court papers read.